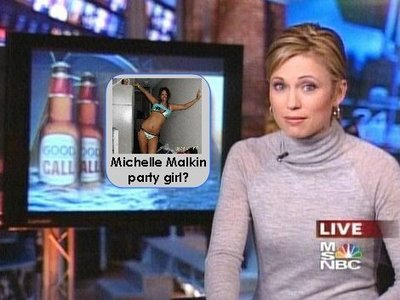 Amazing. The "macaca" incident has proven to be a watershed moment in the political life of Republican Senator George Allen. Now all sorts of folks are coming out of the woodwork with their first-hand recollections of Allen's use of the the "n word." I'm hoping we have another such watershed moment here. 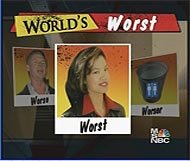 Among Malkin's most bizarre and difficult to believe arguments are that: the internment of Japanese-Americans during World War 2 was perfectly appropriate

and should be re-implemented for Arabs during the War On Terror, that Senator John Kerry shot himself in Vietnam so that he would get a Purple Heart and then could use it to his advantage later in his political life, and that terrorists -- who happen to be Christian -- should not be held responsible for their murderous actions. These are only a few of her more "out there" beliefs.

Of course she's nuts. Of course she's vile. Of course she's a poor man's Ann Coulter. But unlike Ann Coulter, Michelle Malkin is actually kinda cute. And that brings us to our potential watershed moment. In a recent column in the Jewish World Review (she's not Jewish, by the way) entitled Where Have All the Good Girls Gone?, Malkin attacked some British entertainer named Charlotte Church. I have never, in my life, heard of this person. According to Malkin, Charlotte Church has gone from "pure-hearted to pure crap." Why? Because she's showing a little skin. Now she is the "new face of skankdom" according to Michelle. She is now contributing to the slutification of young girls. Malkin wants entertainers to show the same modesty that she does.

How, then, do you explain the Michelle Malkin Spring Break 92 party photos that have recently surfaced? (Wonkette posted it after reading Is That Legal?) 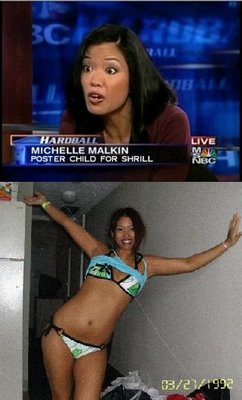 Don't get me wrong. I like girls in bikinis posing sexily for photos, and I like this pic of Michelle Malkin. I think it's great that it surfaced. She seems more human somehow. But, correct me if I'm wrong...Malkin is showing quite a bit of skin, isn't she? Not very modest or Christian, if you ask me. Should she now be drummed out of the uptight, repressed, prissy bitch society?

I hope so. And I hope that more of her "friends" show up with more photos of her before the lobotomy! What about Spring Break 91? I think Michelle Malkin should become the "new face of skankdom" and pose for some new pictures! I am ready for the watershed!

She is a first-rate bitch. I'll never forget her talking about Kerry's self-inflicted gunshot wound on Hardball.

Of all the right-wing lies, that ransk in the Top 3 of all time. Sickening.