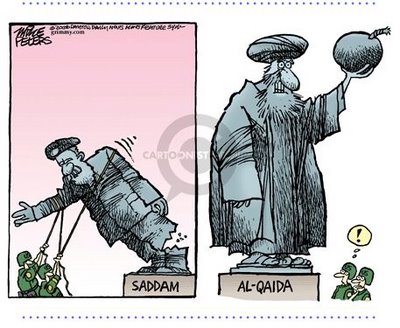 "The intelligence estimate, completed in April, is the first formal appraisal of global terrorism by United States intelligence agencies since the Iraq war began, and represents a consensus view of the 16 disparate spy services inside government. Titled 'Trends in Global Terrorism: Implications for the United States,' it asserts that Islamic radicalism, rather than being in retreat, has metastasized and spread across the globe."

This should be what wins the election for the Democrats. Sadly, I think too many Americans will be distracted by side issues like gay marriage and the fact that gas prices are only "slightly out of hand" as opposed to "totally out of hand." Bush and the GOP have framed their entire reason for remaining in office on their assertion that their ideas for combatting terrorism are working. Clearly they are not. Game over. If you vote Republican, then you must enlist in the military and volunteer all of your income to pay for the war you chose to start. Those of us who have been opposed all along deserve a break for being right. To quote rock band The Hives, I "Hate To Say I Told You So."