If I Were Reading Blogs Today, I'd Want To Know About... 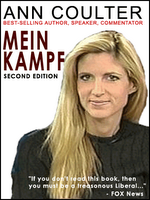 A new book entitled I Hate Ann Coulter will be published this Fall. The authors of the book are requesting anonymity because "None of us want our real names in the hands of gun-toting, abortion clinic-bombing, self-proclaimed 'wing nuts,' who follow Coulter." Perfectly reasonable. I can't wait to read the book. Remember, no personal attack is out of bounds when dealing with Coulter. Fire must be fought with fire.

Republicans, it seems, can't help but be dishonest. An aide to New Hampshire Republican Rep. Charles Bass was caught posing as a liberal blogger making comments on various liberal blogs. He was hiding his identity to make comments in an attempt to discredit certain polling information. The owners of the sites tracked the commenter's IP address to his House of Representatives office. According to Bass, he will be "disciplined." Translation: the president will give him a Medal of Freedom Award.

Legendary DC rasta-punks Bad Brains will be re-uniting for two shows at CBGBs before the club shuts down. The two shows are scheduled for October 9 and 10, and all original members of the band will be performing.

Gene Simmons' Family Jewels is still on the air. Tonight's episode has Gene hanging with a fan for a day as part of a contest. A trailer for the episode can be seen here.

Guns N Roses headlined the KROQ Inland Invasion concert last Saturday night. By all accounts, the new GnR was running on all cylinders, and put on a great show. Until it gets pulled down, Culture Bully has pictures and mp3s from the show.

Back to politics...Texas Republican Rep. Ralph Hall (TX) was paid to slander a teenage sex slave by Jack Abramoff. Abramoff's client, The Marianes Islands, is known to be rife with sweat shops and child sex slaves, yet continues to receive tax benefits from the US government. This was due to the protection given to the client by Tom Delay. Delay is gone, and now much of the truth about the real goings-on on that island are coming to light. Hall took a junket to the island -- paid for by Abramoff -- and returned to Congress. Afterward, he accused a 15 year-old girl (who the Dept. of Labor confirmed had been taken from her parents' home in the Phillipines to the Marianes to be a sex slave) of being a liar and sung the praises of the island. He inserted his comments to the Congressional Record at the behest of Abramoff. Scumbag. Hall's Democratic opponent has made it a campaign issue. Hall is crying foul. Republicans never like being held accountable for their actions.

Lastly, don't forget to check out the new show Studio 60 on the Sunset Strip tonight on NBC. I was totally into the pilot episode last week and think this could become a really great series. Aaron Sorkin (West Wing, Sports Night) seems to have created another winner. It's hard not to like a show with Amanda Peet, plus the pairing of Bradley Whitford and Matthew Perry looks like a great comedy team. I am hooked.
Posted by Dave Splash