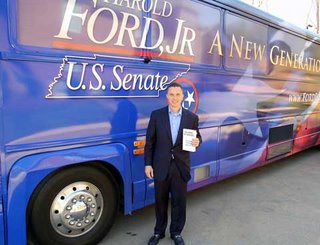 A new Benenson Strategies Group (D) poll gives Rep. Harold Ford, Jr. (D-TN) a six-point lead over Bob Corker (R) in the race for Tennessee's open U.S. Senate seat. Ford has gained four points since August, currently ahead by a 45% to 39% margin. (from DailyKos)
-------------------------
I have been a huge supporter of Harold Ford Jr. ever since I met him at the Memphis airport in the late 90s. I said then, and I still believe it now, that Ford could someday become the President. He is that impressive in person. I have never been one of his constituents, but he was still willing to talk issues with some random stranger in an airport!

In 2005, Ford - at age 34 -- challenged Nancy Pelosi for the leadership position of the Democrats in the House. He did not win, but I was impressed with his willingness to challenge the party establishment. Ford is on the verge of becoming the first-ever African-American Senator from the state of Tennessee. His victory could put his possible Presidential ambitions on the right course. Watch this race.

Email ThisBlogThis!Share to TwitterShare to FacebookShare to Pinterest
Labels: Democrat

I agree. He will make a great Senator.

Before Barack Obama came on the scene, I would have thought maybe Ford would have been the first black President. Now, I'm not so sure. Still, he is an impressive guy.