Blogging Instead of Working 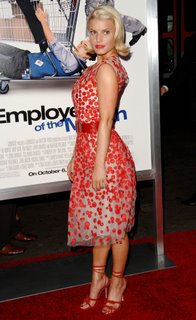 For the past two weeks I have started working from home three days a week. It has been great. I can stream Air America while working (I can't do that at the office because streaming is blocked), and I don't have to deal with the phone constantly ringing. Unfortunately, though today is supposed to be a home day, I am stuck in the office. Our office manager is conveniently stuck at home waiting for a plumber to show up and fix a sink. Strange that her husband (who is retired) can't wait for the guy. I think something is up. Regardless, all my work is at home, so I can't get anything done here. Work sucks. The only positive is that there is a new woman working in the office next door to mine, and she is off-the-chain good looking. She asks for computer help -- which I ordinarily find annoying. I have no problem with helping her though.

Wouldn't you know it, Jessica Simpson has yet another new movie coming out. It's called Employee of the Month. I seem to remember a movie starring Matt Dillon from just a few years ago called the same thing. I won't be seeing the movie at the theater because I'm certain it will suck. This is strictly a cable movie for me. A commenter at Internet Movie Data Base (IMDB) said that this movie would have been better if Simpson had not been cast, and that "They dress her slutty the whole time." That is a complaint? I don't know if I'm feeling the new 1950s look she's sporting in the picture above, however.

I blew off seeing Headlights last night at O'Leavers. I had to go into the studio to cut next week's History Lesson spots, so I was there for a couple of hours. By the time I finished, I was in no mood to go to a show. Somehow that studio just drains all of the fun out of me. I taped segments for Motorhead, Big Black, XTC, Husker Du, and one other that I am somehow forgetting. Apparently, the spots are going over well. The station got a ton of calls on the Failure segment I did, and my brother's business partner heard the one I did for Gang of Four and said it was excellent. Yea for me!

Tonight is Nada Surf at Sokol Underground. As of now, I am planning to go. A lot could change by tonight, but I think it is pretty certain that I will be at the show. Apparently, the opening act White Whale is supposed to be really good. It features former members of The Get-Up Kids. I may have to head in a little early to catch some of their set, too. I was disappointed by the last band I saw with former members of G.U.K., Koufax; and I actually never even liked G.U.K. to begin with. Oh what will I do?

Any Bjork fans out there? I just heard that she is re-uniting with her original band The Sugarcubes for some concerts in Iceland. The money is being used to fund her non-profit record label. No word on an extended reunion or tour.