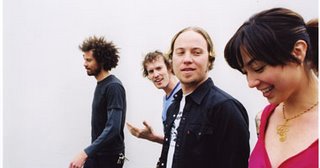 Pat Spurgeon, drummer for Rogue Wave, and an integral part at one time or another of many, many other great indie bands is in desperate need of a kidney transplant. Please donate at www.roguewavemusic.com and read below...

On September 30th 2006, San Francisco band Rogue Wave will host a benefit concert to raise money for their drummer Pat Spurgeon, who is in desperate need of a kidney transplant.

Pat was born with one kidney and it failed. He had his first transplant in 1993, which served him well until now. After 13 years, it has started to deteriorate. He has been on dialysis since April and is hoping desperately to find a donor. Some of their friends have gotten tested to see if they are a match, but Pat has yet to hear good news. Provided he finds a donor, there will be an enormous amount of costs that both Pat and his donor will incur.

In a logical world, medical insurance would cover his donor's and his expenses after the procedure, but it does not; so he and his family must carry the financial burden. The expenses can be huge. We are trying to raise money for costs like: donor's travel, care, bills, lost work wages, etc., as well as Pat's expenses, care, bills, etc. while he is in recovery.