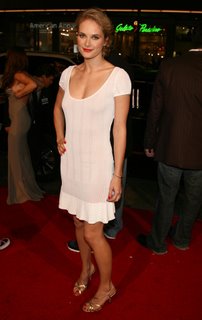 I can honestly say that I have not really been paying attention to all the hype surrounding Snakes on a Plane (which opens today, by the way). But as I am a total internet loser, I am obviously aware of its existence and it's most famous line, "I'm tired of all these motherfuckin' snakes on this motherfuckin' plane!"

What I didn't know was that Rachel Blanchard is in the movie. Rachel who? Rachel Blanchard. Rachel is probably best known as the Cher Horowitz from the TV version of Clueless. I always thought she was better looking than Alicia Silverstone, who played the role in the movie (and went downhill after those Aerosmith videos). Clueless was a great franchise, and Silverstone made a mistake by not continuing with it. But her loss was my gain, as I discovered Rachel Blanchard. Is she a great actress? I don't care. She could be for all I know. I'm superficial. I just like the way she looks. 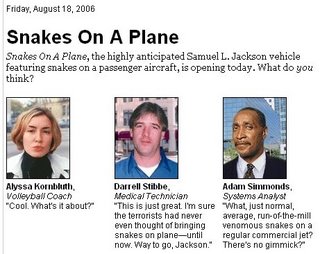 Tag: Snakes on a Plane
Posted by Dave Splash

I did a paste-up of this in honor "Snakes on a Plane" yesterday, and so now I guess I've got to put up or shut up and see the damn thing. :-)

I saw that. It was really funny.

Man, I gotta LOVE the Onion!!