We On the Left Need To Kick Out The Crazies 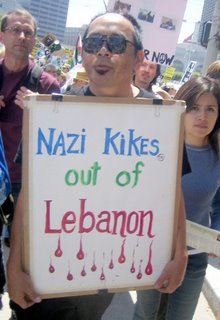 I am a Liberal. I am proud to say so. I oppose the Iraq War -- always have. I think George Bush stole the election in 2000, and will never be convinced otherwise. But I have said numerous times on this blog that where Israel is concerned, the left has it all wrong. The negativity and vitriol of the far left (which is not represented by the Democratic Party, thank God) toward Israel is outrageous and completely off base.

The above picture is from a recent anti-war rally in San Francisco (seen on Andrew Sullivan's blog along with another "protester" claiming that "Mel Gibson was right"). The photo is disturbing enough, but what is more disturbing is that many in the crowd probably agree with this whack job!

There is anti-semitism in some of the anti-Israel sentiment on the left. This cannot simply be dismissed. Where is the outrage about the nearly quarter million killed in Darfur? Nowhere. Where is the outrage about the 20,000+ dead Iraqi civilians from the Iraq War or the tens of thousands killed by Sadam Hussein? Nowhere. But when Israel is attacked by an international terrorist militia, responds with force, and civilians caught in the crossfire are killed, the protests begin. Based on the anger of the protesters, you would think that there is violence and war nowhere else in the world except Israel -- that there are no other disputed territories in the world except for Gaza and the West Bank (anyone heard of Kashmir or Cyprus? What about the stateless Kurdish people?).

Israel is singled out for special harassment by groups like ANSWER, Democracy Now!, Human Rights Watch, and Amnesty International. These groups are left wing groups whose stated goals are ones that I agree with. However, I am forced to turn away from these groups due to their refusal to reign in its overt anti-Israeli positions and the anti-semitism of some of its membership.

It is okay to tell someone (even someone you agree with 95% of the time on other matters) that they are wrong and need to stop doing what they are doing. Democrats are getting lumped together with the lunatics and bigots like the guy in the picture, and we are refusing to do anything to distance ourselves from them. People like him are not helping our cause.

We liberals are right on the issues. We are right to be against Bush's Iraq debacle. We are right to say that the Republican methods are losing the war on terror. But we need to make a distinction between the Iraq War and Israel; and we need to recognize that extremist, Islamic terrorism is real and it is a serious threat. It is not a construct of the Bush Administration, even though Bush & Co. use it for political gain and little else. Just because the GOP has bungled the fight against terrorism and conflated the Iraq War and 9/11, does not mean that terrorism is not worth fighting. We need to be smarter than the Republicans on this issue, show that we are serious, and that people like this protester do not represent us.

If we Democrats want to lead the country, we have to have the courage to dismiss some of the fringes. This is not an endorsement for Republican-lite candidates like Joe Lieberman. Democrats should be Democrats. But fringe leftists like the douchebag in the picture do not represent my views and I am not going to remain silent about it.
--------------------------------------
Daniel Goldin at Huffington Post has written a column I completely agree with on a related subject. Read it here.

I totally agree with you, Howard. Israel plays hardball but that's only because they're standing alone against basically every other country in the region.

The above picture is why I avoid the rallys - that and the inclusion of unrelated topics (like the status of Puerto Rico).
Everyone is entitled to a voice, but I won't add mine to the crazies and don'y want the dilution of mine by them.

Conflating Democracy Now, Amnesty International, Human Rights Watch and something like ANSWER (an organization that is in conflict with much of the far Left for its neo-Stalinist ideology and obsequious love of dictators) is problematic in the first place, but even so, the fact that you also conflate any of these with anti-Semitic whackjobs that come out and say "Nazi Kikes out of Lebanon" or "Gibson is right" means you are simply setting up a straw man to attack.

There has been constant discussion on the far Left of how to differentiate critique of Israeli policies from any anti-Semitism and also critique of and discussion about how to be careful with who and what groups to make alliances with.

Methinks the problem here is that you do not come from an objective standpoint on the issue of human rights when it comes to Israel. While rightly condeming Hizbollah for it's breaches of international law in indiscriminately bombing Israeli civilian centers, you refuse to see that Israel systematically was in breach of international law in its indiscriminate bombing of Lebanese civilian targets and infrastructure (International law not only prohitbits the targeting of civilians or failing to distinguish between combatants and civilians in a military campaign, but it also demands of the parties to a conflict to actively differentiate between civilian and military targets). Dropping some pamphlets and then designating a time after which everyone remaining is a terrorist and legitimate target and the area a legitimate free fire zone does not make it legally the case.

By the way, how do you know that this guy in the picture is a leftist? When there are anti-war demonstrations, especially dealing with Israel and the middle east, the crowd is usually made up of a variety of people, including Leftists, Arab nationalists, Islamicists, and some anti-Semitic hobbyists. Do you know what was said to him by other protestors there, was he criticized? I have been to my share of protests and when something like that is seen(sadly too often, though peripheral), arguments usually ensue between the demonstrators.

"We liberals are right on the issues." Well you personally are right on many issues, but your stand vis-a-vis Israel is highly problematic. You tend to merely reflect in reverse the rhetoric of those who blame Israel for everything. Granted you do a little "Operation Margarine" but that is the limit of your 'critique of the minutiae so as to justify the totality.'

So as not to leave my obscure reference to margarine where it is. It is an article by Roland Barthes, where in short he says:

"To instill into the Established Order the complacent portrayal of the drawbacks has nowadays become a paradoxical but incontrovertible means of exalting it...A little 'confessed' evil saves one from acknowledging a lot of hidden evil."

It is really difficult for me, a staunch righty, to really appreciate the opinions of the average liberal today, for this very issue. If anti-semitic rhetoric makes its way any furthur into the mainstream of liberal politics in America, I may find myself inclined to leave this country...
Howard... you have my utmost respect... I may not see eye to eye with your politics, but this is clearly not a partisan issue, and unfortunately and somewhat surprisingly it is liberal thought, especially on a global level, that has recently been perpetuatuating this hatred...

While I appreciate the kind words, I think you are getting a different message from my posting than was intended. I specifically said that it was the fringe left that harbored some anti-semitism, but that the mainstream Democratic Party and mainstream liberals do not. I said that as a Democrat, we need to make sure to distance ourselves from that fringe rather than embrace it as some would like.

There are a lot of conservatives in America today that try very hard to make the case that what Bush & Cheney are doing in the Middle East is somehow beneficial to Isarel, and therefore, Jews in general. I disagree. Furthermore, there are conservatives that claimed that voting against Lieberman in the Dem primary in CT was anti-semitic. It is definitely not.

I pointed out that it is Christianists like Pat Robertson who influence the right-wing thinking on Israel, and that it is not for the benefit of Jews. They do it for their own twisted religious reasons.

But I am surprised that you would consider "leaving this country" over anti-semitism in liberal politics. How would you know if there is any? The right has dominated the politics in America for the last 6 years. Liberals have had no voice in America for a long time. If you are unhappy here with the politics, I suggest you look toward the big White House on Pennsylvania Ave in Washington, DC.

First I'd like to ask whether you would consider the anonymous Democrat who has posted here supporting the dogma, to be a left wing extremist.
The reason that I would consider leaving the country is because in times of outright and public shows of anti-semitism, as we Jews have learned the hard way, it is better to be in a country populated by our own kind. I'm not so neive as to say that the holocaust was an isolated phenomenon of a specific time. Jews know that the holocaust was a repeat of something that has gone on for a long long time. Germany before naziism took hold was anything but facist... I personally am not going to take chances... and I'm not all that extreme...
Due to failing immigration policies, the political dynamic in the United States leans ever farther toward the left. If the mainstream left moves farther toward such a fervant anti-semitic bent (NyTimes and CNN) with regard to Israel... and by this I mean slanted reporting reflecting exactly what you find on Amnesty International or Human Rights Watch's website... Then why should I not be seeing it as a sign that my safe time in America is limited. I'm sorry but I dont have that luxury...
Left politics needs a makeover... and unfortunately I find that either for political reasons or maybe in persuit of a global view, there has constantly been argument over non-partisan issues regarding Israel. Like you said...
"Israel is singled out for special harassment by groups like ANSWER, Democracy Now!, Human Rights Watch, and Amnesty International. These groups are left wing groups whose stated goals are ones that I agree with. However, I am forced to turn away from these groups due to their refusal to reign in its overt anti-Israeli positions and the anti-semitism of some of its membership."
These are the organizations that the left wing trusts...

Again... Thank god for liberals like yourself who can see when argument is not always the democratic way...

I honestly don't know anything about the anonymous poster. I wouldn't necessarily assume he/she is a Democrat as you do, however. I would say they are far left, but not an extremist.

While CNN and NY Times often seem overly sympathetic to the Arab position in the overall Arab/Israeli conflict, I don't think it could be described as anti-semitism. Want to see real anti-semitism, read a newspaper from Iran or Saudi Arabia. I don't want to fall into the trap of assuming that all reporting that does reflect Israeli PR is anti-semitic -- just like reporting that does not mirror the Bush/Cheney talking points is not anti-American.

We could go back and forth on this, but who has that kind of time. I said what I wanted to say in the posting.