This Is Just Not Right 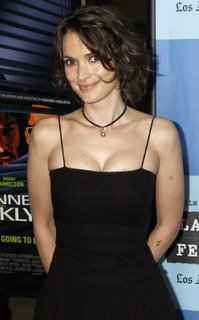 Winona Ryder has a crush on Keanu Reeves. While they were filming A Scanner Darkly together she constantly told him that she, well, basically wants to do him.

Keanu knows I have a huge crush on him, I tell him all the time. "My character cares very much about Keanu's character, and with Keanu it's very easy to care about him... I was frustrated because we didn't get to make out properly."

Some might think I'm taking her quote out of context, but chances are those people have never been around Winona, and if they did, they didn't have a penis because, well, Winona Ryder is a nympho. In a interview with FHM last year, Jamiroquai front man, Jay Kay, said she wore him out with her "nonstop demands for sex," and although she had "enormous breasts," he found her too "exhausting," So, either Jay Kay is a pussy, or Winona has the sex drive of a bunny on crank. I might be wrong, but I'm gonna go out on a limb and say the second one. If you're Keanu Reeves, you probably already know this. Nothing says a girl has a crush on you quite like a love letter and her amateur fisting video under your door.
-------------------------------
Not only is it wrong for a woman as amazing as Winona Ryder to have a crush on Keanu Reeves, but how about that quote from the Jamiroquai guy?! WTF? Too "exhausting"? What a loser. Whatever. I have had a crush on Winona Ryder since Heathers, and her shoplifting incident a while back only made her hotter.

Email ThisBlogThis!Share to TwitterShare to FacebookShare to Pinterest
Labels: Babes

I agree with you: Jay Kay sucks to make such comments about his ex. So bloody un-elegant !!! Who wants to be his next one ?
Besides, she was Johnny Depp's wife/girlfriend or whatever for a long time and HE didn't complain about her sex-drive. HE's the man!

She also went out with Dave Pirner (Soul Asylum) for a long time. I don't recall him ever bitching about that. Kay is a pussy, plain and simple. And his band sucks, too.