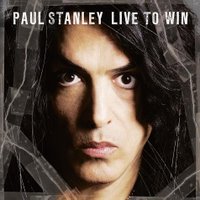 The new solo album from Paul Stanley can be streamed here.
---------------------------------
SANTA MONICA, CA-New Door Records/UniversalMusical Enterprises are proud to announce the October 24, 2006 release of Live to Win, the solo release from iconic KISS frontman Paul Stanley. The voice and songwriting force behind such KISS classics as "Detroit Rock City," "Black Diamond," Hard Luck Woman" and "Tears Are Fallin'," Stanley's career with KISS spans more than three decades and in excess of 100 million records sold worldwide.

Stripping all the legendary bombast away, what becomes starkly clear is that besides rocking relentlessly, the power of human emotion and conviction on Live to Win can rattle not only the walls, but also touch the heart and soul of the listener. "What I wanted to do on this album was sing about my life because my life is not that different than anybody else's," he continues. "The truth is, what we all deal with in life is pretty similar. You change the names and the story's the same."

"This album is purely a labor of love," says Stanley. "It is a labor of passion, and something where I was concerned with turning out the album I heard in my head, without regard for having glitz and star power from other sources. It was purely about making the album I wanted to make." While the heartfelt "Loving You Without You Now" was written without any outside collaboration, the remainder of the album reunites him with former KISS songwriting partners Desmond Child [Aerosmith, LeeAnn Rimes] and Holly Knight [Tina Turner, Pat Benatar], and introduces new collaborators including Andreas Carlsson [Bon Jovi, Britney Spears], John 5 [Rob Zombie, Marilyn Manson] and Marti Frederiksen [Aerosmith, Faith Hill]. Seven of the ten tracks were co-written with Child and/or Carlsson, with Stanley and Child joined by John 5 on "Where Angels Dare" and Frederiksen on "Lift," and Knight teaming with the frontman on "It's Not Me."

"I've always believed that when you give somebody an album, it should be like a fresh newspaper, where you get ink on your fingers and it's today's news," says Stanley, who wrote and co-wrote the ten tracks on Live to Win specifically for the new release. "For me, this album is where I'm at now - This is where things are in my life, and my perspective on my music.

Stanley is planning a North American club tour to coincide with the release of the album.
---------------------------------
The new Paul Stanley album could be good, but probably not. To see why KISS is my favorite band, watch this clip of them from a 1975 appearance on The Midnight Special performing "She." Fucking brilliant.