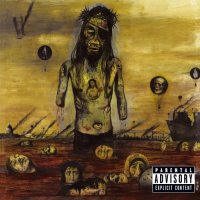 I picked up the new Slayer CD last night. Fucking brutal! The disc is called Christ Illusion,(click to buy) and most of the songs deal with the usual Slayer topics: war ("Consfearacy"), anti-Christianity ("Skeleton Christ"), and violence ("Catalyst"). The first single, "Cult" is a pretty harsh attack on all religion. They certainly will not be playing at the next Republican convention.

There is one exception to the usual Slayer subject matter on the new one. The song "Jihad" appears to be about the 9/11 attacks on the World Trade Center. The Slayer twist is that they write the song from the terrorists' perspective. This will certainly get them some attention from the Sean Hannitys and Bill O'Reillys of the world. I would love to see Kerry King face off with Hannity. That would be a great visual.

King writes most of the songs on Christ Illusion which is a little different for Slayer. Also, the songs are much shorter than on more recent Slayer records. I listened to the record about three times right after buying it. It's a totally solid album. I hope they play in Omaha on this next tour.

The YouTube video here is of Slayer on The Henry Rollins Show from a few weeks ago. They are playing "Cult."

I've been a huge Slayer fan since about 1984. If anybody has a cow it would be the PMRC. They've tried to kill Metal ever since Tipper Gore started that poxy big brother operation back in the 80's.