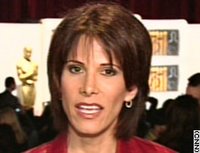 Daryn Kagan, CNN morning anchor and sometime girlfriend (yuck!) of Rush Limbaugh has announced she is leaving the network. Is she going to Fox News where all of the other disgruntled media types go? Nope. She is going to start a website that covers news in a more "spiritual" way. Apparently, straight news reporting is lacking in that. Here is her quote:

"I think there is a void in the straight news business now, (which is) lacking a certain spirituality," Kagan told The Associated Press on Thursday. "I think most people live in a space where they are looking for meaning in life and good in the world and that is not necessarily reflected in straight news coverage right now."

My question to Kagan: Why should it be? It's news. Facts. Events. Adding your version of spirituality is just like Fox adding it's Bush worship into the mix. Clearly you were never more than a pretty face reading a teleprompter. You know nothing about the news.

Yeah, I don't think she has a lot of moral credibility since she's the former girlfriend of a prescription drug addict who recently got back from a vacation in one of the Western Hemisphere's main sex trade countries.