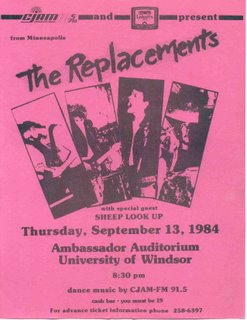 (Reuters/Billboard) On the heels of their surprise reunion to record two new songs for the recent Replacements best-of album, Paul Westerberg and Tommy Stinson are together again on two songs from the soundtrack for the animated film "Open Season" soundtrack.

The album, due September 26 via Lost Highway, includes 10 Westerberg originals, of which "Love You in the Fall" and "Right to Arm Bears" boast Stinson on bass.

The film, which features the voices of Ashton Kutcher and Martin Lawrence, opens three days later.

One Westerberg track each is performed by Pete Yorn ("I Belong (Reprise)") and Deathray ("Wild As I Wanna Be"). Rounding out the soundtrack are Deathray's "I Wanna Lose Control (Uh Oh)" and the Talking Heads' "Wild Wild Life." The score was penned by Westerberg and Ramin Djawad.