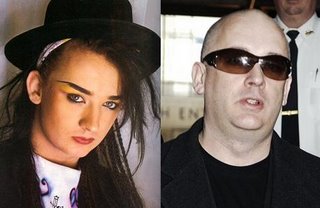 I didn't like Culture Club when they were current, and I don't like them as a retro act. Just boring stuff. Perhaps if I did like them, then I would find this story more sad than funny. But, hey, it's Boy George, so it's very funny.

Boy George To Pick Up Trash in August Heat
(AP) Boy George will perform his court-ordered community service by picking up trash on city streets in the August heat, a sanitation spokesman said.

The one-time Culture Club singer will be issued a shovel, broom, plastic bags and gloves when he reports Aug. 14 for five days of work, said department spokesman Vito Turso.

"This is the epitome of community service," Turso told the Daily News for Monday editions. "It's not like he's going to be working in an air-conditioned office."

Born George O'Dowd, the 45-year-old singer has struggled with drug problems for years. He was ordered to do community service after pleading guilty in March to false reporting of an incident. He called police with a bogus report of a burglary at his lower Manhattan apartment in October, and the responding officers found cocaine inside.

Turso's statement was the first indication of what sort of work the singer would be given. He could be assigned to pick up streets in Chinatown, Little Italy, Nolita or parts of the Lower East Side.

O'Dowd became an '80s icon with his androgynous appearance and vocals on hits such as "Karma Chameleon" and "Do You Really Want to Hurt Me?" A Manhattan judge threatened the singer with jail time if he failed to complete his five days of community service before Aug. 28.