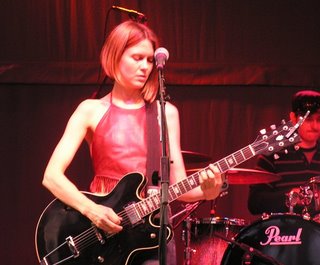 I have been a fan of Juliana Hatfield's music for more than 15 years. It is rare that an artist can keep my attention for that long. She had a brief flirtation with mainstream success in the early 90s with her song "My Sister," but that flirtation was very brief. She has largely been an underground sensation for her entire career.

During an interview in the early 90s, Juliana made the claim that she was still a virgin (I call it a claim because I have no firsthand knowledge). She was then rumored to be having a fling with Lemonheads leader Evan Dando. She was close friends with him, and played bass on Lemonheads' most popular record, It's a Shame About Ray. For some odd reason, the issue of whether or not Juliana Hatfield lost her virginity to Evan Dando has been something indie rockers have been obsessing about for years.

Juliana has finally set the record straight. In an angry letter to Boston weekly newspaper, Dig, Ms. Hatfield takes the paper to task for continuing to feed this rumor. Her letter is posted here.

Just because I have Juliana on the brain, here is an mp3 from her first solo album, Hey Babe. The song, "Nirvana" was originally recorded by Juliana's first band The Blake Babies. The Babies version was acoustic, her solo version is more rocked out. Enjoy.

i only know of her through "my sister". which album of hers you recommend i pick up? if you've been a fan for 15 years, she's gotta be worth a listen for me.

I'd say her first one, 'Hey Babe' is the best. I'd also recommend 'Only Everything' and 'Juliana's Pony: Total System Failure.'

I think she's great, and is an underappreciated artist. Let me know what you think.