Despite the fact that it is an obvious rip off of The Osbournes, I have to admit that I was wrong about the Gene Simmons' Family Jewels show. I watched the first four episodes last night, and it was actually pretty good.

Gene toned down the obnoxious asshole persona that he has perfected over the years, and when it rears its ugly head, his kids push it right back down. They are his harshest critics. When Gene starts rambling on about all of his accomplishments, we see Nick and Sophie (the kids) roll their eyes and tell him to shut up. They don't put up with any of his bullshit -- neither does Shannon Tweed, to whom he has been "happily un-married" for 23 years.

Gene's son, Nick, is a lot like Gene without the obnoxiousness. He has a band (which Gene tries to take over in one of the episodes) and seems like a cool guy. Apparently, he is quite an illustrator and is working on a graphic novel. Actually, Gene used to create his own comics when he was a kid, too.

The daughter, Sophie, seems like a sweet girl. Despite being only 14, it is obvious that she has inherited her looks from her Playmate mom, Shannon. There is one episode where Mother and daughter visit Fashion Week in NYC, and Sophie gets hit on by all sorts of men who should know to stay away from such a young girl. Mom is right there to remind these guys of that, and there are quite a few embarrassed folks after that.

I do think that many of the activities on the show are staged, so it is not nearly as authentic as The Osbournes seemed. However, I am totally surprised by how much ribbing Gene tolerates (and allows on the show) from his family. That makes the show for me.

I can't believe I'm saying this, but I am looking forward to next week's episodes. Staged or not, the show is much better than I thought, and I am not embarrassed to be a Gene Simmons fan when I watch it. 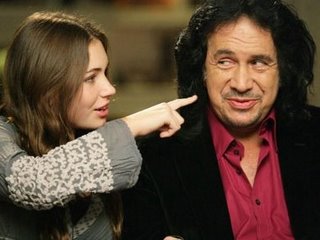