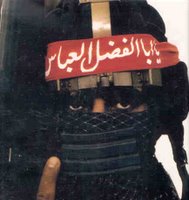 To those of you who mistakenly believe that negotiating with terrorists like Hezbollah is the way toward peace in the Middle East, and felt that pressuring Israel to stop its effort to rid Lebanon of these scumbags was a solid idea, I say "I Told You So."

Hezbollah Balks At Withdrawl From South
(Washington Post)BEIRUT, Aug. 15 -- Hezbollah refused to disarm and withdraw its fighters from the battle-scarred hills along the border with Israel on Tuesday, threatening to delay deployment of the Lebanese army and endangering a fragile cease-fire.

The makings of a compromise emerged from all-day meetings in Beirut, according to senior officials involved in the negotiations, and Prime Minister Fouad Siniora scheduled a cabinet session Wednesday for what he hoped would be formal approval of the deal. Hezbollah indicated it would be willing to pull back its fighters and weapons in exchange for a promise from the army not to probe too carefully for underground bunkers and weapons caches, the officials said.

Hasan Nasrallah, the Hezbollah leader, had insisted that any disarmament of his militia -- even in the border area -- should be handled in longer-term discussions within the Lebanese government, according to government ministers. But the Lebanese army, backed by key political leaders, refused to send troops into the just-becalmed battle zone until Hezbollah's missiles, rockets and other weapons were taken north of the Litani River, the ministers said.

At stake in the standoff was implementation of a crucial provision of the U.N. Security Council cease-fire that went into effect Monday. The accord called for quick deployment of 15,000 Lebanese army troops south of the Litani River along the border with Israel. They were to take up positions under the aegis of a reinforced contingent of the United Nations Interim Force in Lebanon, or UNIFIL, to form a peacekeeping corps with a total strength of about 30,000.

Hezbollah's reluctance to get its men and arms out of the border zone reflected nervousness over the continuing presence of Israeli soldiers on Lebanese soil. But it also demonstrated the militant Shiite Muslim movement's increased assertiveness here after a war of more than a month during which it stood off the Israeli army while Lebanon's national army stood aside. (read more)