Checking In From Vancouver 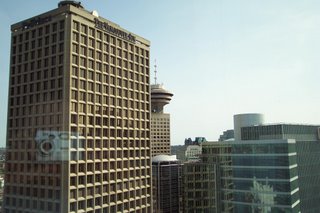 Day one of the trip: I had to get up at the ungodly hour of 4:00 am to catch my ride to the airport. We took a limo -- that was nice. Uneventful flight, except for the fact that I was seated in the last row of the plane. That is definitely the worst spot to be in. When people started lining up for the bathroom (which I thought wasn't allowed anymore since 9/11), it was unbearable. I was getting knocked around more often than an aging prize fighter. It sucked.

We checked into the hotel in Vancouver, BC and had lunch. The hotel is amazing, and is right on the water. The picture above is the view out of one side of the hotel room (if you look closely you can see my camera in the reflection -- I am not a professional photographer). I took a quick walk around the area to see what was up.

I had heard that Vancouver has "Amsterdam style" coffee houses in the city, and a relaxed attitude toward pot smoking. I asked one of the luggage guys if this was true, and if there was one close by. He showed me on a map where one of them was, but told me that it was "bring your own." Damn. I didn't bring it because I was worried about customs. Oh well, we might try and go to the coffee shop and see if anyone can help us out.

The cruise actually starts on Saturday, so I am in BC until then. I should be able to post more later.

Email ThisBlogThis!Share to TwitterShare to FacebookShare to Pinterest
Labels: Vacation

I went to a "pot" coffeehouse up there a few years ago. Kind of an amazing experience.

We went to the coffee house, but couldn't find any. They dont sell it in the place, they only allow you to smoke your own. I did buy a pipe made of indestructable glass, though.