This Is Why America Is Doomed If Republicans Stay in Charge 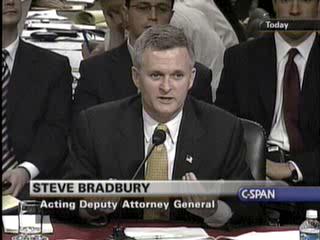 LEAHY: Was the President right or was he wrong?

BRADBURY: It’s under the law of war –

LEAHY: Was the President right or was he wrong?

He is not "always right." In fact, he is rarely right. The policies put forth by the Bush/Cheney administration and passed into law by the Republican Congress are reaking havoc on the country and the world. With the possible exception of Andrew Johnson (1865-1869), there has never been a US President who has been this wrong, this often. While Johnson's actions caused nearly a century of suffering for African-Americans; Bush's actions are destroying America's international standing politically, economically, and militarily.

There has to be check on his power. America is creeping toward something very dangerous. I am waiting for Attorney General Alberto Gonzalez to declare that presidential elections are "unconstitutional" in his opinion during a "time of war". Then, Bush can remain in office as long as he wants. The way the so-called War on Terror is currently being handled, it is to the right's advantage to keep it going as long as possible. As long as they can keep people afraid, they can retain their power. And that, after all, is all the Republicans care about -- POWER. They have abandoned all principles of conservatism in order to blindly follow their exalted leader George W Bush.

Did you notice that since the 2004 election ended, there has not been a single raise in the terror threat alert? That thing was being raised and lowered every week prior to the election. Election over -- threat over? Now, as the Congressional elections are approaching, miraculously all of these terrorist plots are being thwarted (if you call some Florida weekend warriors with paintball guns and delusions of grandeur a terrorist plot), and Bush & Co. bend over backwards to pat themselves on the back for the great job their doing. Fox News is still peddling the nonsensical story that there is WMD in Iraq, and that Saddam Hussein was involved in 9/11!? GIVE IT UP.

All I can say is, for the future of the country, vote Democrat in November. Please. You don't have to love the Democrats, but you do have to honor the concept of checks and balances in government. The Republicans have shown that they are unwilling to provide any oversight of the Executive Branch. They look the other way while the nation's future is being flushed down the toilet. But at least they get to keep their earmarks and committee chairmanships!

When voting in November, ask yourself which is a greater threat to America's future: Gay people or Al Queda? Flag burning or Trillion dollar budget deficits? Seperation of Church and state or unsecured ports? "Liberal" judges or removal of checks and balances in government?

If you think the first answer is the greater threat, then you are part of the problem. That is a fact. Either stay home this November or stop listening to Rush Limbaugh and watching Fox News. Your choice.