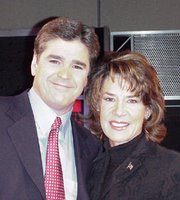 Man, you fix a presidential election for the Republicans, and look how ungrateful they are! That's typical of the Bush family, but political parties are usually more loyal. Gosh, couldn't have happened to a nicer lady!

Party Chairman Carole Jean Jordan made a last-ditch attempt in the confidential May 7 letter to force Harris out of the race for the nomination to challenge Democrat Sen. Bill Nelson. But the next day, Harris turned in paperwork to get her name on the Sept. 5 Republican primary ballot.

The letter came as Gov. Jeb Bush was trying to get state House Speaker Allan Bense into the race. Bense announced later that week that he would not enter the race.

Harris rose to national prominence as Florida's secretary of state during the bitter presidential election recount in 2000 that gave the White House to George Bush. She was elected to the U.S. House in 2002.

"Katherine, though it causes us much anguish, we have determined that your campaign faces irreparable damage," the letter said. "We feel that we have no other choice but to revoke our support."

"The polls tell us that no matter how you run this race, you will not be successful in beating Bill Nelson, who would otherwise be a vulnerable incumbent if forced to face a stronger candidate," it said.

Since the letter was written, three political newcomers have entered the race against Harris: LeRoy Collins Jr., son of a former Florida governor; Peter Monroe, a developer who helped manage the government's savings and loan bailout; and lawyer William McBride.

The state Republican Party confirmed the letter's contents Monday. In a statement, Jordan said she was "disappointed" that the private letter had been made public but added that "our concerns about the race and Congresswoman Harris' campaign still exist."

In a Quinnipiac University poll released Thursday, Harris had a comfortable lead in the GOP primary race but was behind Nelson by 37 percentage points in a general election matchup.

The letter to Harris listed major obstacles, including coverage of campaign contributions she took from a defense contractor, Mitchell Wade, who later pleaded guilty to bribing another congressman.

Harris has said she wasn't aware of the illegal contributions and that she was only trying to bring high-wage jobs to her district when she tried to help Wade's company, MZM Inc., get a federal contract.

Man, there really is something to that Karma stuff. You throw bad out into the universe and eventually it's going to find its way back to yo a$$. Couldn't happen to a better person...unless it was GW :-)

Hey dude - I like the new feel of the joint! Good stuff, homey!

To Katherine Harris: you go, girl!

I love the way she obviously thinks she can win in spite of all the negativity she faces. Ya gotta love her optimism! Heh! If she wants to guarantee Bill Nelson (the incumbent Democratic senator, not the former Be-Bop Deluxe guitarist) another term in the senate, that is fine with me. I love to see her continuing her ill-advised campaign.

It was a good race. Thanks for reporting on it.