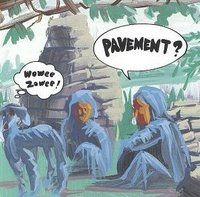 It's about freakin' time! Matador Records has announced that it will be re-issuing Pavement's 1995 album Wowee Zowee. Matador had been re-releasing each of the Pavement albums to coincide with its 10 year anniversary, but nothing happened when Wowee became 10 years old.

The re-issues for both Slanted and Enchanted and Crooked Rain, Crooked Rain were incredible collections. Both featured an entire second disc of bonus material -- much of it previously unavailable in any format. But when 2005 ended without any mention of a re-issue for Wowee, I assumed Matador had cancelled the project.

To many Pavement fans, Wowee Zowee is an unsung classic. It was written off at the time of its initial release as being too weird. It may have been too weird for much of the mainstream audience that had discovered Pavement the year before, but it was not for older fans. The album was a commercial disappointment at the time, and led many critics to begin writing Pavement's eulogy.

Pavement made two more albums before officially breaking up in 1999. At this time, Matador has not released a track listing or a release date for the expanded Wowee. In case you don't have the original, here is one of the many great tracks from the album.

Pavement - Father To a Sister of Thought.mp3

Thanks for the tip! I will have to re-examine Pavement. I wasn't impressed the first few times I heard their stuff, but I love the Matador label. I have loads of discs by Guided By Voices, all of the Chavez CDs, some Mogwai, Matmos, New Pornographers, both Interpol discs, Bardo Pond, etc. Still no Pavement or Cat Power, so I need to get busy.

Sadly, the only sophisticated CD shop in Oregon east of the Cascade Mtns. (and right here in my town), is closing in about a month (because of what I fear is, forgive me sounding elitist here, a general lack of musical sophistication... around here, modern "country" and "contemporary Christian" music tend to rule...) The shop's owner and I have become good friends over the last couple of years, and he has been giving me good deals on some items lately; I may have to see if he has any of the earlier Matador Pavement reissues!