Luna's Tell Me Do You Miss Me: Another Side of the Music Business

I took the opportunity last night to watch the new documentary on one of my favorite bands, Luna. The DVD, Tell Me Do You Miss Me,was just released last week along with a new greatest hits CD, The Best of Luna. While the CD is intended to be either a celebration of the band's career or an introduction to an artist too many people missed out on, the documentary is definitely for those who already consider themselves to be serious Luna fans. The film is no celebration, either. It is quite depressing.

It's not only depressing because it is about the end of the band, it is depressing because of the way it ended. Luna went out with a whimper, not a bang. For a band as excellent as Luna, with a career lasting more than 12 years, it shouldn't have ended this way -- in virtual obscurity. I say virtual obscurity, as opposed to total obscurity, because Luna did have their small cult of fans around the world. I was among them. I consider Luna's 1995 CD Penthouse to be one of the best rock CDs of all time.

Director Matthew Buzzell followed Luna around the world on its final tour (2004-2005), but did not limit his filming to the concert stage. He was given a high level of access to the band member's personal lives -- including lots of time backstage, on various planes, and inside the band's tour van. The band members obviously have an intimate connection, but there are some serious tensions that show up between them in some of the film's best moments. My favorite was an argument between band leader Dean Wareham and lead guitarist Sean Eden. The fight was about something stupid, but it revealed some longstanding issues the two seem to have had. 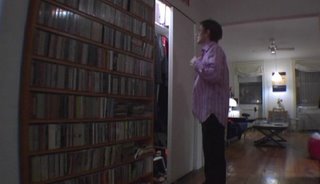 Dean Wareham gets dressed before the final Luna show.
For my money, I would have liked more concert footage in the film. There is some bonus material included on the disc, but it only includes four complete songs. That is just not enough. But the wealth of interviews and other personal stuff made me really like this DVD. There are no wild and crazy groupie moments, or insane, drunken antics, just four talented musicians coming to grips with the end of an era in their lives. 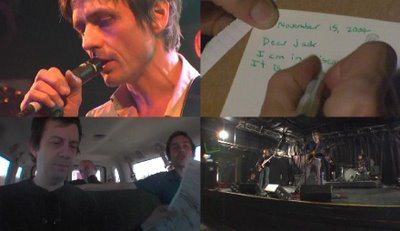 Wareham and bassist Britta Phillips became a couple at some point after she joined the band in 2001. The two live together in New York, and still make music together. In one of the interview segments, Wareham reveals that he wanted to break up Luna in 2000 when original bassist Justin Harwood left the band. But his "interest" in Britta kept the band going for a few more years.

It's too bad that Luna's music isn't universally known, or that they weren't doing a "farewell" tour of stadiums across the country. Things didn't work out that way for them. But anyone who likes Velvet Underground-inspired guitar pop should have some Luna CDs in their collection. Once you become a fan, pick up this DVD. You'll appreciate it much more.

To see a trailer of the film, go to the band's website.

It is worth whatever you have to pay for it. Let me know what you think.