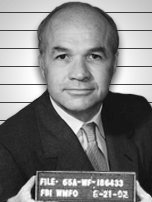 Today was Ken Lay's funeral. In attendance were former President Bush, former Secretary of State James Baker, and the Mayor of Houston. In total, there were more than 1000 people there. The theme of the mourners' remarks? What an honest man Ken Lay was. WTF!!??

I know he's dead, and it's not nice to speak ill of the dead, but fuck that. Lay is a convicted criminal, and was one of the "architects" (and beneficiaries) of the largest corporate scandal in US history. This man is nothing more than a common criminal. He ruined the lives of thousands of people, and swindled millions. He is also one of the authors of our current energy policy -- you know, the one that has given us $4 per gallon gas and the highest profits in history for oil companies.

Lay is a scumbag. Dead or not, that is not changed. He escaped punishment by dying before going to jail. But unless you are his wife or kids, you should have nothing to say about this loser except...GOOD RIDDANCE.

PS - Fuck Ted Rall. His piece today states that Warren Buffet is "1000 Times Worse than Lay." That is perhaps the stupidest thing I've ever read -- except for maybe the "report" on Fox News' website that says Saddam had WMD.