Even More On Mel Gibson 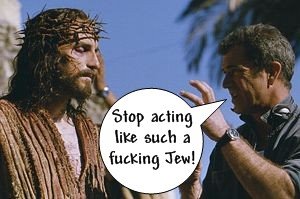 It's not like Mel Gibson's anti-semitism was not well known before this latest example. Funny how someone who spends so much time trying to deny that he is anti-semitic, keeps having incidents like this. The right wing embraced him because of his ridiculous Passion of the Christ movie (a HUGE hit in Iran and Syria due to it's overt anti-semitism). He has given a wonderful piece of cinematic propaganda to the extremists in the Middle East. Explain why this guy is a hero to Conservatives? Has anyone in the right-wing Evangelical crowd condemned Gibson now? I doubt it. He'll probably go on Oprah, have a good cry, and the right will let it go.

Look, Iran has made their own Passion-inspired movie:

(I saw this video at Andrew Sullivan) (UPDATE: 7:08 pm: If the video is not there, then it was removed by YouTube)

how can a man with such outstanding christian morals get pulled over for a dui?

its all the jews' fault, right mel?

Now he wants the Jewish Community to help him in his "recovery." I guess, then if he starts drinking again, he can blame the Jews for his failure to recover.