This Will Be a Busy Week 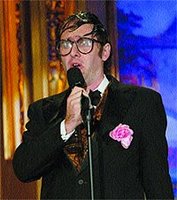 Caught Neil Hamburger last night at O'Leavers, and he was everything I was hoping for and more. Typical Hamburger joke: "Why won't Courtney Love be having any cranberry sauce at Christmas dinner this year?...Because she'll be dead before Christmas." Or how about: "Why did Angelina Jolie and Brad Pitt go to Namibia to have their baby? So they'll have someone to blame if it's retarded." That's pretty much what he's like. He delivers his awful jokes in his deadpan style, and after about a dozen or so jokes like that, it becomes quite funny. The crowd loved it, and Neil told the show's promoters that he will definitely be back. He ended his set by saying, "Thank-you, goodnight, fuck you." Perfect.

There are a number of shows worth mentioning this week. Friday night at Jackson Artworks Gallery (1108 Jackson St) is the Graphic Noise / Rock Posters at 1000 dbs show. The show is a travelling assortment of concert posters from across the country. In addition to the posters, three local musicians will be playing: Jake Bellows of Neva Dinova, Ted Stevens of Cursive, and Simon Joyner will be doing acoustic sets. Tickets are $5 at the door.

And, of course, Omaha's resident rock star Conor Oberst will be bringing Bright Eyes to town for a free show at Memorial Park. The show is being put on by the city of Omaha (and, I'm sure a corporate sponsor) and 1% Productions. Last year, 311 (also Omaha natives) drew 30,000 people to the park. I have no idea how many will turn out for Bright Eyes.