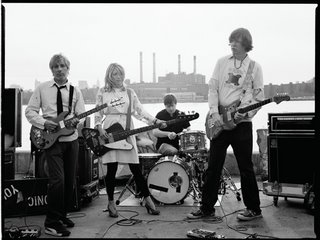 Santa Monica, California, June 8 , 2006 – New York’s most influential avant-garde rock band Sonic Youth will be playing a private show for their fans July 8th in Los Angeles at a secret location to be disclosed only to lucky laminate holders. Tickets are not for sale, the only way fans can secure tickets is to purchase Sonic Youth’s new cd Rather Ripped on release date at participating Los Angeles retailers (see list of retailers at www.sonicyouth.com). Once the cd is purchased the consumer will receive a laminate with RSVP instructions for the show. This event is presented by Filter Magazine to celebrate their 5th Anniversary and the release of Rather Ripped. Tickets are available on a first come first serve basis so get to your local store early. Rather Ripped will be released on Geffen Records June 13th.

Sonic Youth will spend the summer out on the road in support of Rather Ripped. Kicking of their club headlining tour will be a show at the legendary New York City club CBGBs on June 13th. Sonic Youth spent much of the 80s performing at CBGBs and last played there in 1992. 25 years later the band returns to the site where it all began. Sonic Youth will continue their summer tour with various headlining dates, a stop at the Bonnaroo Arts & Music festival in Tennessee, west coast dates with Pearl Jam, Lollapalooza in Chicago, dates with the Flaming Lips and two shows at McClaren Park Pool with the Yeah Yeah Yeahs. Joining the band on the road will be their touring bass player, Mark Ibold from Pavement.

Rather Ripped was recorded in the waning hours of 2005 into the dawn sunshine of 2006 at the venerable sear Sound studios in New York City. Partially mixed there and at Hoboken, NJ’s Water Music by John Agnello it exhibits Sonic Youth in positive vibration mode. Twelve songs of forward motion and harmonic /melodic surprise. Rather Ripped also see the band return to their nucleus formation of Thurston Moore, Kim Gordon, Lee Ranaldo and Steve Shelley.

do those links work? I'm sorry, but I dont think they do. try this:
http://burl.fergcorp.com/ablogsoup.blogspot/6bf49

Thanks for the info?