Saved By The Rogers Sisters

Against my better judgment (because I got about 4 hours of sleep the night before), I ended up going out last night to Sokol Underground. I had been thinking about seeing the I Love You But I've Chosen Darkness show for a while, and despite my exhaustion, I soldiered out to the show. I have seen their name everywhere, and I know that Britt Daniels of Spoon produced their first album. I thought it would be worth seeing. To be honest, I had only heard one song by them prior to the show. It was a good song -- total 80s synth pop -- but I didn't know if an entire show like that would be any good. Turns out...it wasn't.

I thought ILYBICD was pretty boring, and I left after about three songs. They sounded like an even less interesting New Order. I just wasn't feeling it. The 40 or 50 people in the crowd liked it, apparently. The audience was way below expectations according to the promoters. Still, I am glad that I went because one of the openers -- The Rogers Sisters -- was freaking excellent! 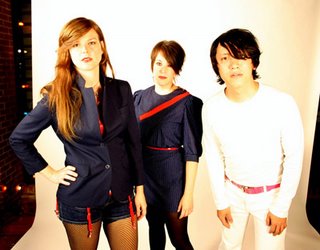 This NYC band (who are not actually sisters, and one of them is a guy) played a noisy, sort of dissonant type of rock. The bass player was phenomenal. The band's songs had a minimalist feel at first, but most expanded into feedback drenched freakouts. If you're a fan of Sonic Youth, My Bloody Valentine or any of Jon Spencer's bands, you should appreciate The Rogers Sisters.

I have played this song -- The Rogers Sisters - Why Won't You.mp3 -- on my radio show a few times, but now that I have seen them, I realize that it isn't very representative of their sound. Still, it's a cool song. It comes from the band's most recent CD, The Invisible Deck.