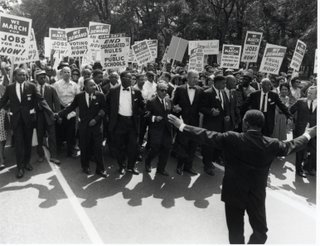 And The GOP Wonders Why No Blacks Vote for Them?
(NY Times) House Republican leaders today abruptly canceled a planned vote to renew the Voting Rights Act after a rank-and-file rebellion by lawmakers who say the civil rights measure unfairly singles out Southern states and promotes multi-lingual ballots.

The reversal represented a significant embarrassment for the party leadership, which has promised a vote on the landmark anti-discrimination law and hailed its imminent approval in a rare bipartisan press event on the steps of the Capitol last month.

But lawmakers critical of the bill mutinied in a closed meeting of House Republicans this morning just hours before the vote was expected to occur and several said it was uncertain whether a majority of Republicans would back the legislation at this point.

"A lot of it looks as if these are some old boys from the South who are trying to do away with it," said Representative Lynn A. Westmoreland of Georgia, who said it would be unfair to keep Georgia under the confines of the law when his state has cleaned up its voting rights record. "But these old boys are trying to make it Constitutional enough that it will withstand the scrutiny of the Supreme Court."

Despite what appears to be mounting Republican resistance, the leadership issued a statement declaring that once the concerns of lawmakers are addressed, it will move ahead with a vote on what the leaders described as one of the nation's most important civil rights laws.

"While the bill will not be considered today, the House G.O.P. leadership is committed to passing the Voting Rights Act legislation as soon as possible," the statement said.

Democrats and civil rights groups expressed severe disappointment in the change of plans.

"The fact of the matter is that you have a small group of members who have hijacked this bill and many of these individuals represent states that have been in violation for along time," said Nancy M. Zirkin, deputy director of the Leadership Council on Civil Rights.