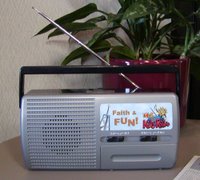 About a month ago, I emailed the Program Director at my radio station and expressed some frustration with the progress of my show. I told her that I had been doing the show for a year and a half, and that I still could not tell if anyone was really listening. Now I'm not exactly sure how to gauge these things. I don't take requests, so I rarely announce the phone number. I can't base it on calls. I don't mention the show's website because (technically) I am not supposed to do a site unless it is approved by the station. So, I can't base it on traffic to that site. I have never once seen a ratings book, but the PD says those are largely meaningless for a non-commercial station. So how do I know if anyone is listening?

We had a three hour meeting last night to discuss ways to give the show more exposure. Unfortunately, moving the show to a weeknight was off the table. It had to be on the weekend. Considering what is already on the weekend schedule, none of the available times were any better than what I have now (Sunday night at 11 pm). So moving the show was not going to happen. However, the PD came up with a decent idea, and I am pretty excited about it.

I do a segment on the show called the "History Lesson," and it is basically a segment on an older artist that fits in well with the theme of the show. I have done segments on The Replacements, R.E.M., New York Dolls, Superchunk, and Galaxie 500 to name a few. The PD wants me to do a daily "history lesson" segment to run at 12:30 in the afternoon. It would come right in the middle of the popular "nooner" segment, which is an all request hour. I would get up to 15 minutes to play 1-3 songs by the artist, and tell a little spiel about them. Following the lesson, a promo spot for my weekly show would be aired. I think it could be a good way to bring in new listeners to my regular show which offers an expanded "History Lesson" surrounded by new, likeminded music. We are tentatively setting September 1 as the launch date for this new segment.

I have already begun compiling a list of bands to use, and in just an hour of trying, have over 100 names. She also told me to "have fun with it" and that I can use pretty much anyone -- as long as there is some sort of way to tie it to bands I play on the show (i.e. influenced by, former members of, etc.). So I could do a segment on T. Rex, for example, by pointing out their influence on David Bowie, who then influenced artist X, who then inspired artist Y, who formed a band with members of band Z. You know what I'm saying? It opens up a lot of possibilites.

I also brought up the idea of streaming the show, and it seems that it may be in the works. Great news for my non-Omaha readers!

That sounds like a great concept. I've always been kind of fascinated with the idea of doing a "family tree" of rock.

Does your station do any radio streaming on the 'Net? It'd be cool if I could check out your set sometime!

They are looking into the streaming stuff now. I'll keep you posted.