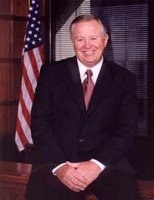 Keith Olbermann just named Omaha's Mayor, Mike Fahey, as his "Worst Person in the World" on today's show. Ouch! Fahey earned the title for his comments after Omaha received a 62% increase in federal "terrorism" money. Fahey essentially said that New York was experiencing "sour grapes" over losing 40% of their money.

Look, I live in Omaha. I don't want to be hit by terrorists. But it is totally ridiculous to think that Al Queda has Omaha on its target list. I don't think New Yorkers are experiencing sour grapes, I think the Department of Homeland Security is populated primarily by idiots.

Fahey was just being an asshole. He began thinking of all the ways he could spend that money, and made a stupid comment.