Just Got Back From Bright Eyes -- I'm Soaked 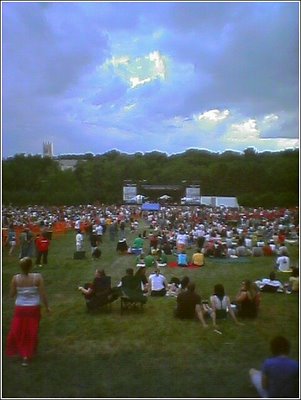 Here is a crappy photo I took with my cell phone of Memorial Park at the just-ended Bright Eyes show. The weather was great through openers Neva Dinova and Gruff Rhys, but it started getting a little freaky right as Bright Eyes was about to go on. I was standing backstage when one of the promoters told me that he had just left an emergency meeting with the Mayor. They got some information that said a huge storm would be hitting in about 20 minutes. I ran out to the crowd to inform my friends of the situation. A couple of people -- the pussies -- decided to leave. The rest of us toughed it out.

The rain hit just as Bright Eyes walked on stage, and it came down pretty hard for about 40 minutes. I was thoroughly soaked, but it was worth it. This version of Bright Eyes featured Maria Taylor on drums which was cool -- I didn't even know she played drums. The set was pretty diverse and included a couple of new songs. Despite the rain, the show was a success and a lot of fun. Now I need to go and get dry.... 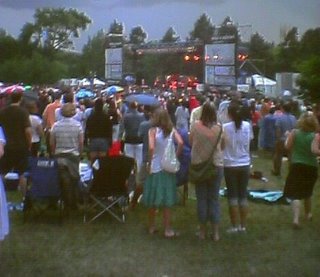