How To Be A Conservative Author In 8 Easy Steps 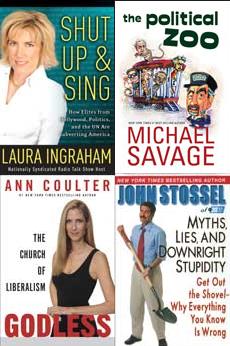 This thing is so spot-on. This shows the true cookie-cutter writing style of all the conservative "authors."

Conservative Books For Dummies
(by Bennet Kelley at Huffington Post)
You too can become a best-selling author of conservative books in eight easy steps -- really. This is made possible by conservative publishers applying the lessons of Henry Ford's assembly-line production to the publishing industry by following a proven formula to churn out book after book, each guaranteed early best-seller status through bulk sales to conservative groups.

For example, Ann Coulter's newly released Godless: The Church of Liberalism is her fourth book in five years. Your path to replicating her success is only eight steps away.

Use the word liberal like it is the foulest word in the English language, but still use it a lot.

Your target for vilification, whether it be the Clintons, feminists or some other lucky group, must lead to the immediate ruin of our democratic system, Judeo-Christian values and/or Western Civilization and you are leading the charge to, in the words of Michael Savage, "beat back the tentacles of today's ever-expanding liberalism, which even now threatens to corrupt and ultimately destroy America's most cherished institutions."

The corollary to the second rule is that you and your conservative brethren are the oppressed underdogs even if they control all branches of government and the media. For example, Ms. Coulter complains that liberalism has become the nation's "official state religion [while] Christianity and Judaism are prohibited by law." This would be news to the Democrats who still cower at the thought of being branded with the "L" word, but Ms. Coulter recognizes that the perception that this might or could someday be true is certain to sell books.

Always remember that anything good happened because of Reagan and anything bad happened because of the Clintons -- no exceptions. For example, Reagan brought us "Morning in America" but is never responsible for the huge deficits of the 1980s that lead to the 1987 stock market crash (which either were immaculately conceived or the result of the big-spending Democratic Congress). At the same time, Clinton is as a "tax-and-spend liberal" for eliminating the deficits he inherited from Reagan and the elder Bush, but the economic boom that followed was solely the result of Reagan's policies and a Republican Congress.

Your vision of America must be something close to a cross between Little House on the Prairie and Happy Days, where white men were in charge, women stayed at home and what was good for GM was good for America -- that is until the liberals ruined it all. Nobody excels at conservative nostalgia like Ms. Coulter, who wants to repeal every law since the Emancipation Proclamation (including women's suffrage) and concedes she longs for the Cold War days when "at least our enemies were white."

To make your case you can cite one example of something that might have happened in Walla Walla, Washington as a sign of a national movement (e.g., John Gibson's "war on Christmas") or you can just make stuff up (it saves on footnotes). For example, Spinsanity described Ms. Coulter's Slander as "riddled with factual errors, egregious misrepresentations and a constant stream of broad, inflammatory claims about liberals." Why do research, when you can appear on the O'Reilly Factor instead?

Your book must deliver the joy of hate to your readers, which is why liberals are not just wrong, they are, in the words of Ms. Coulter, Mona Charen, Mike Gallagher and Michelle Malkin, "traitors," the "spawn of Satan," "unhinged" and "useful idiots" who are trying to destroy "every value and standard, principle and ideal, concept of God, family, honor, duty, country and decency that we hold dear." There is one caveat to this rule -- you should be careful not to go after widows, orphans, cripples or people like Mother Theresa as you should save them for your next book instead.

Rule 8: The Importance of Good (Contra-)Diction

To be anointed as the next hot conservative author, you must be ready to spout pithy poison darts and gloss over the obvious inconsistencies in your message in all media appearances. For example, you must be able to claim that conservatives are for a strict interpretation of the Constitution according to the Framer's intent except when it means upholding separation of church and state, limiting the authority of President Bush or selecting a president. Don't sweat this rule too much since you always have Rule 7 to fall back on if you get in trouble.

By simply following these eight rules, you can become a best-selling author and member of the new conservative elite overnight. So skip the research and start typing and soon you will join Ann Coulter, Sean Hannity and others in toasting to the true hero of today's media conservatives -- Dr. Faustus.

Wow, what a great piece. He really lays it all out on the table.

Another mistake Reagan made was signing off on the amnesty bill in 1986. An excellent example of him wanting to look like the good guy but not being willing to do the hard stuff.

Is there some way we can blame Clinton for that? I mean didn't he have sex with a woman other than his wife? That caused our immigration problem in the first place, right?

i did not have sexual relations with that woman.

clinton is the man. great prez.