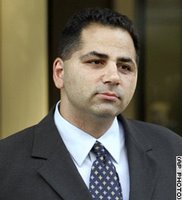 In the first of what will likely be many convictions for illegal lobbying activity and influence peddling, White House chief procurement officer David Safavian was found guilty on four of the five crimes he was charged with. The charges stem from Safavian's dealings with Republican lobbyist Jack Abramoff, and his subsequent lying about those same dealings.

But I thought no one in the Bush Administration knew Jack Abramoff?