Getting My Priorities Straight 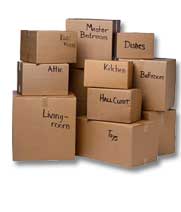 Sorry I have been a little light with postings this week. My office moved to a new building and it has taken a lot more time and effort than I had originally anticipated. Moving the files, computers, and supplies was pretty basic, but setting everything up -- including some new network printers -- was a lot harder than I thought it would be. The networking here is ridiculously tedious.

The building is still being finished even though we are moving in. The bathrooms only work on one floor. The air conditioning is sporadic. It's a mess.

Another problem is the new internet set-up they have here in the new office. It sucks. They have it "protected" by some software that is meant to restrict access to certain sites. Now, I can understand why an office does not want its employees looking at porn at work, but I see no reason to block pretty much anything else. I tried to order office supplies online, and Office Depot.com was a blocked site! WTF? It was in the category of "shopping" and that is a banned category of sites. It's pretty stupid. But, we are getting a normal IP address next week, and will not have to deal with it.

Bottom line is that I have been too busy to blog at work, and have been too exhausted when I get home. I'll get better I promise. At least Blogger isn't banned...yet.