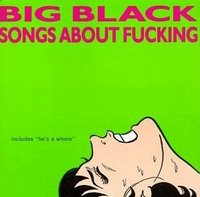 (Pitchforkmedia) Better start lifting weights now, because Big Black are back! Well, for a little while, at least.

Steve Albini's legendary noise-punk band will appear on stage for the first time in almost two decades this September at Touch and Go's 25th Anniversary Celebration. According to the label, it's "just a couple songs, but who cares how many they play?" Yes, exactly. (I really hope they do "Kerosene" and "Jordan, Minnesota", personally.)

Man, if I wasn't already married to the Pitchfork Music Festival, I'd call this the best lineup of the year! And there's still one more band to be added. (Rapeman?)

I remember the first time I saw this cover my jaw fell open.

Mine too. Then I immediately bought the album!