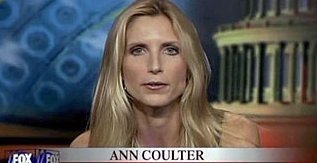 (Saw this at Media Matters) In her newest book, right-wing sociopath Ann Coulter has written that Jews are Christians, while Episcopalians are not. She writes:

"Throughout this book, I often refer to Christians and Christianity because I am a Christian and I have a fairly good idea of what they believe, but the term is intended to include anyone who subscribes to the Bible of the God of Abraham, including Jews and others."

Later in the book, she says of the Episcopalian Church: "...the Episcopal Church -- which is barely even a church..."

I find it more than a little odd that these statements would appear in a book called Godless: The Church of Liberalism (I am not linking to the book). Coulter's point in the book apparently is that liberals hate religion, and are hostile to religious people. Well, in her extreme ignorance, Ms. Coulter (if she really is a woman...I swear she has an adam's apple) has just dismissed millions of religious people including the president's father, George H.W. Bush, who is an Episcopalian. Also, her knowledge of Jews is quite lacking.

I am not an especially religious person. I do not attend a synagogue with any degree of regularity. But I do know enough to know the difference between Christianity and Judaism. Furthermore, the Muslim holy book, The Q'uaran, makes reference to both the Old and New Testaments in its text. So, are Muslims actually Christians, too? If so, then why has Ms. Coulter called for the forced conversion of all Muslims to Christianity?

Just writing this much on Coulter has given me an upset stomach. I need to go and throw up now. Man, I hate Ann Coulter. How does anyone defend this idiot?

The scariest thing about Ann Coulter is the number of books she sells, it actually terrifies me that there are that many people out there that agree with her.......*shudder* :)

You shouldn't assume that everyone who buys her books agrees with her. Just like how many listen to Rush Limbaugh just to yell at the radio, I imagine many buy Coulter's stuff just to release some steam.

But, yeah, it's sad that so many find her to be anything beyond insane.

i hate her. in fact she wants people to be all upset at her, so i just dismiss her existence.

you know, her dress gets shorter the more people start to hate her. and i sort of agree with your statement that she's really a dude.

Good point, Howard. The worst thing about people like her and Rush and Michael Savage is that their venom is entertaining. Can you imagine what she'll be saying if a Dem wins in 2008?