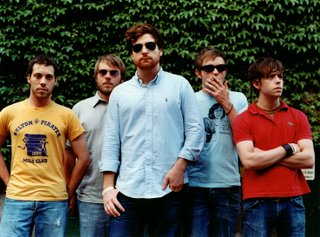 The title "Best Band You've Never Heard" has been given to a number of bands over the years. I'm adding Koufax to that list. The band is perhaps known to some because they feature the former rhythm section of the Get Up Kids. If that doesn't mean much to you, then how about this quote from the website Eleven Elephants about their "mixing ELO synths with the power pop witticisms of Elvis Costello or Joe Jackson and the breathless heart of punk." Sounds pretty cool, eh? Hope so.

The band will perform tonight in Omaha at Sokol Underground along with Drag The River, Cordero, and An Iris Pattern. Tickets are $8.

If you want to get a taste of what Koufax sounds like, here is an mp3 of my favorite track from the band's newest CD, Hard Times Are In Fashion.

Koufax - "Why Bother at All" (mp3)
Tag: Koufax
Posted by Dave Splash