Sex and Google in the Muslim World 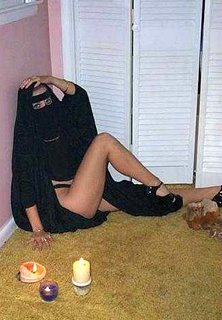 Andrew Sullivan has a brief mention today about a new feature that Google has added to its search engine. They have created a new thing called Google trends, and it allows users to see what the most searched for topics are, and in what regions of the world most of those searches are coming from. Sullivan pointed out what I had recently been noticing with regards to visitors to my site: the most searches for "sex" are coming from Muslim countries. Countries like Saudi Arabia, Egypt, Pakistan, etc. How funny.

One of the most popular features on The Dark Stuff is the O'Sexxxy Factor. Whenever a new one is posted, I get a lot of looks from people in that part of the world. I think Bill Maher is pretty much spot-on when he says that the reason so many young Muslims are so angry is that they need to GET LAID! Maybe if Muslim women weren't forced to wear beekeeper suits and masks, we wouldn't have had 9/11?! Well, that is a stretch. But it is an interesting thought.

And to my Muslim readers in the land of Mohammed, today's picture is just for you guys!

Email ThisBlogThis!Share to TwitterShare to FacebookShare to Pinterest
Labels: Sex

Interesting stuff,
but 'sex' is such a yesterday word to search in google. Have you ever tried the word 'fuck' or 'gay' or 'kinky' or somethin' like that. I guess you won't be surprised.

Well, I am usually looking for 'naked midgits' so I'll have to test that one out.

you moran, you got to read what is being explained @ the following URL:

First off...Fuck You. Don't come onto my site and call me a moron. (Please note the correct spelling).

Secondly, I am entitled to my opinion. That is what is great about being in the West. You can disagree all you want -- that's your right.

But don't insult me because you disagree. That is another problem in the Muslim world. No one has respect for different views.