Rhino Records is now taking adavnce orders for the new Replacements collection, Don't You Know Who I Think I Was? The Best of the Replacements. There are song snippets on Rhino's page, including the two, new songs. Here is the blurb for the CD: 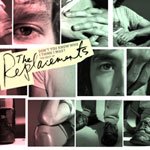 Led by ace singer-songwriter Paul Westerberg, ragged Minneapolis rockers The Replacements are arguably the most iconic band of the 1980s underground. Over the course of seven studio albums and some pretty outta-hand live shows, they charted an evolution from sloppy, booze-fueled garage rock to some of the most emotionally engaging booze-fueled garage rock in a generation.

This single-disc set is the first-ever collection to represent both the band's Twin/Tone and Sire/Reprise eras. It gathers signature 20 tracks, including two brand new songs recorded in Minneapolis over Christmas 2005: "Message To The Boys" and "Pool & Dive."

Email ThisBlogThis!Share to TwitterShare to FacebookShare to Pinterest
Labels: The Replacements