M.I.A. Denied Entry Into the US 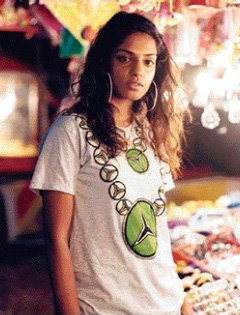 According to Pitchforkmedia, British (via Sri Lanka) pop star M.I.A. has been denied entry to the United States. She was due to come to America to record her second album with producer Timbaland. She posted the following message on her MySpace page:

"THEY TRY SHUT MY DOOR!

Roger roger do you here me over!!!!
the U.S immigration wont let me in!!!!!
i was mennu work with timber startin this week, but now im doin a Akon "im locked out they wont let me in" im locked out! they wont let me in! Now Im strictly making my album outside the borders!!!! so il see you all one day, for now ill keep reportin from the sidelines
to my people who walk wiv me in the America, dont forget we got the internet! Spread the word! or come get me!!!!!! ill be in my bird flu lab in china! liming and drinkin tiger beer with my pet turtel. I love everyone for the support, now i need it more. ill stay up spread out else where."

Apparently, M.I.A.'s lawyers are already on the case.