Quick wrap-up on the Koufax show from last night. Very anemic crowd -- about 30 or 40 people -- but Koufax was received well. The show had started at 8, so when I arrived around 10, Koufax was just about to start. I recognized most of the songs from the Hard Times Are In Fashion

CD, and they did a cover of Joe Jackson's "Steppin' Out" which was nice to hear. There might have only been a few of us that appreciated the cover, but we appreciated it a lot. I took off before headliner Drag The River began. I wanted to save my energy for tonight's Atmosphere show. 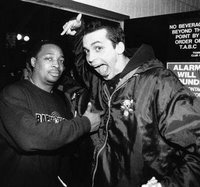 I've seen Minneapolis rap group Atmosphere twice in the last year, and they were amazing both times (the first was famously blogged about here). The show is already sold out, so if you don't have a ticket, you're SOL. I'm not sure why, but tickets for this show sold better than they did last Fall when Atmosphere was playing upstairs in the big room. They downsized this time around, and the show still sells more tickets. Omaha is weird.

Opening the show are Brother Ali, Los Nativos, and Mac Lethal. Last year at Atmosphere's show I got punched in the face -- let's see what happens this year!