It's Hard Out There For a Nebraska Dem 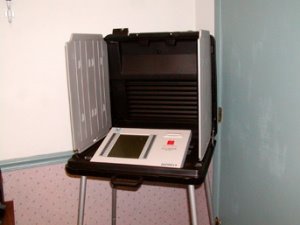 So I just went and voted over my lunch break -- yeah for me, right -- but for the first time in my voting life, there was absolutely no one worth voting for. Seriously. I have lived and voted in Washington, Wisconsin, and Florida before I moved back to Nebraska (where I grew up) about a year and a half ago. Those states are somewhat competitive between the parties. Inside both the Dems and the GOP, there are usually numerous candidates in the primaries. Not in Nebraska.

Nebraska is about as solidly Republican as you can get. The entire state is dominated by one party (save your breath on our "Democrat" Senator Ben Nelson, he is a DINO). Some of those Republicans -- Like Sen. Chuck Hagel -- are respectable, but most of them are not. The party has such a stranglehold on this state, that no Democrats even bother running for many of its offices. In primary season, there just isn't much to do for a Dem.

Since I am a registered Democrat and Nebraska has closed primaries, I was only able to vote on the Democratic ballot. There was no primary challenger for Sen. Ben Nelson, we only have one person attempting to unseat Rep. Lee Terry, and the two Dems running for Governor aren't even campaigning! It was so sad. On at least seven different spots on the ballot, there was not a single person to vote for -- just write-ins. Maybe this is what it feels like for a Republican in San Francisco.

I was turned off by my Nebraska voting experience today, but that will not keep me from the polls in November. I am so looking forward to casting a vote against Lee Terry. That little loser is going down!

Please take note that Nebraska Democrats DO have a candidate for Governor who is actively campaigning and who is serious about winning in November. His name is David Hahn, and if this state gives him half a chance, voters won't be disappointed. Hahn brings a thoughtfulness and a thirst for innovation to this campaign that should make any Democrat proud. Find out more about him at:

That's who I voted for in the primary. I'll look further into him now that he is the nominee and will be going up against Heineman.