If It's "Mission Accomplished" Then Why Are Grandmothers Being Sent to Iraq? 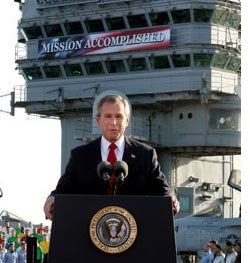 (MSNBC) DUBUQUE, Iowa - A grandmother in eastern Iowa is getting one last call to duty.

Janet Grass, 52, had planned to retire from the military in about 10 months after spending 19 years in the U.S. Navy Reserve. Instead, she has been ordered to leave her job as a special-education teacher in Cascade to do security work in the Middle East.

"They're changing my career just as I'm retiring," she said. "I guess they wanted to try one more thing for me."

Grass boarded an airplane Thursday at the Dubuque Regional Airport amid emotional goodbyes from her family, which includes four children and six grandchildren.