Giant Drag Is Anything But... 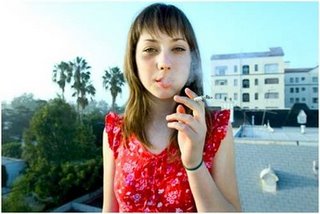 Despite lead singer Annie Hardy being one of the strangest frontwomen in all of rock, I thoroughly enjoyed seeing Giant Drag last night at Sokol Underground. First off, if Ms. Hardy weighs more than 80 lbs soaking wet, I would be shocked. Her guitar looked like it weighed as much as she did! Nevertheless, she was more than able to handle that guitar and sing her quirky, indie pop songs without incident. Yesterday, I described the band as a "more rockin' Blake Babies." That is a pretty good description, but a local music columnist compared them to Madder Rose -- that might be even better.

The band is a two-piece -- Hardy on guitar and vocals, and Micah Calabrese on drums and synth -- and sounded surprisingly full without a bass player. Hardy told a lot of jokes between songs. Her high-pitched, little girl voice, and drugged out delivery made her seem like a female Emo Phillips. Giant Drag's songs feature a darker sense of humor than typical Emo Phillips fare, as evidenced by song titles like "My Dick Sux" and "You Fuck Like My Dad."

I thought they were great, and I was totally impressed by the the drummers ability to play his drums and keyboards at the same time. That has to be difficult.

is available now and worth checking out.

The first opener, The Joggers, were pretty interesting. I missed the beginning of the set, but I did catch them doing a Yes cover. Can't remember the name of the song, but I was never a big Yes fan to begin with. Still, it was different to hear an indie band doing a progressive rock cover song. They were totally able to pull it off, too. The band's original material was pretty disjointed and hard to follow. I liked it, but didn't love it.

I ditched out before headliner Pretty Girls Make Graves began. I was beat, and coming off being sick for a few days. Most of the crowd stayed, however. In that crowd were most of the guys from The Faint, Orenda Fink (of Azure Ray) and a couple of guys from Cursive.

Here is a track from Giant Drag so you'll know what they really sound like.

Email ThisBlogThis!Share to TwitterShare to FacebookShare to Pinterest
Labels: Concerts, Music, The Faint