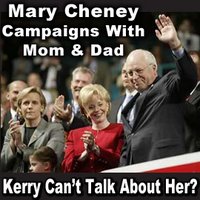 Despite the massive publicity tour and the constant touting on right-wing radio and in right-wing blogs, the new book by Mary Cheney is dead on arrival. According to Andrew Sullivan, the book has sold an paltry 4,091 copies. Cheney received a $1 million book advance, and with an average list price on new books at apprx. $25, the book has brought in only 10% of the advance in sales. That is pathetic for a book by such a high profile person. Guess no one wants to read a book where Ms. Cheney claims she was offended by John Kerry mentioning she was a lesbian in a debate, but not offended by her father's administration attempting to add an amendment to the Constitution that would outlaw her right to marry who she chooses. I guess the hypocrisy book market is not what it used to be.