The Fags Dropped From Warner Bros 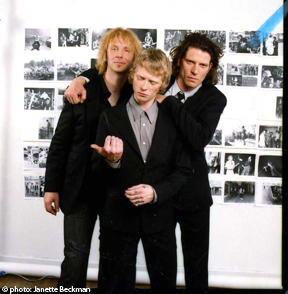 Sadly, it has been made official. Detroit rock band The Fags have announced on their MySpace blog that they were dropped by Sire/Warner Bros. I pretty much knew this was coming. The band's CD, Light Em Up, was scheduled to be released in July of 2005.

When the band was in Omaha last June, singer/guitarist John Speck played me the CD in the van while I interviewed him for my radio show. At that time, Speck said that the label had delayed the release of the CD until the beginning of 2006 for marketing purposes. Then it was delayed until Spring, and now it is being shelved by Warners. Well, fuck them. The band now says the CD will be released by Texas indie label, Idol Records. Idol released the band's debut EP, The Fags.

Until the CD is released, The Fags have placed four songs from the album on its MySpace page. Fans of Cheap Trick-style hard power-pop should check it out.

Email ThisBlogThis!Share to TwitterShare to FacebookShare to Pinterest
Labels: Music, The Fags