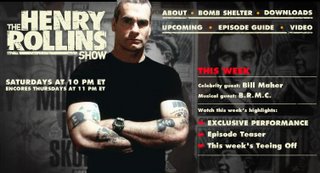 I gotta give it up to Henry Rollins for his excellent new show on Independent Film Channel (IFC). I first heard about it because of an appearance by Kimberly Kane (her appearance was pretty weak actually), and I have been watching it ever since. He gets very interesting people to interview, and has great musical guests. Last night's show featured an interview with Bill Maher, and Black Rebel Motorcycle Club was the musical guest.

Say what you want about Rollins as an artist, but his new TV show is worth viewing. If you get IFC, the new episodes air Saturday nights at 9 PM CST.

i agree. it is the only thing on tv that i tivo.

I've been setting mine for the last few weeks, too.