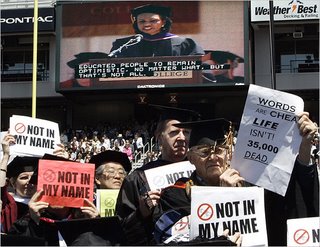 Another Member of the Bush Admin. Greeted by Reality
(NY Times) Secretary of State Condoleezza Rice delivered the commencement address at Boston College today to an audience that included dozens of students and professors who turned their backs and held up signs to protest the war in Iraq.

About 50 students and dozens of faculty members, sporting white armbands to protest the Boston College's granting of an honorary degree, stood and turned their backs as Dr. Rice spoke. Some held signs reading, "Not in My Name," with a red slash through a diploma.

Outside Alumni Stadium, protesters marched up Beacon Street, holding signs reading "No Blood For Oil" and "We're Patriotic Too." They assembled across the street from the stadium, where 3,234 graduates passed through metal detectors before taking their seats on the school's football field.

Inside the stadium, however, Dr. Rice received a rousing standing ovation as she was introduced. She drew applause throughout her address, where she joked about feelings of discomfort surrounding her football loyalties. Dr. Rice received a master's degree from the University of Notre Dame, Boston College's archrival in football, and has been a Fightin' Irish fan for years.

Dr. Rice told students of what she believes to be the five responsibilities of educated people — to find your passion, be committed to reason, reject false pride, be optimistic and reject prejudices. She acknowledged the protests and received applause after urging graduates to consider perspectives different than their own.

**(oh no, she didn't say that?!!)**
"There is nothing wrong with holding an opinion and holding it passionately," Dr. Rice said. "But at those times you're absolutely sure that you are right, go find somebody who disagrees. Don't allow yourself the easy course of the constant 'Amen' to everything you say."

The selection of Dr. Rice has roiled the leafy campus of this Jesuit-run school since it was announced May 1. She was asked to speak last spring, and her selection was confirmed by the school's board of trustees, said Jack Dunn, a Boston College spokesman.

Faculty and students were upset that Boston College conferred an honorary law degree upon Dr. Rice, saying her endorsement of the war runs counter to Jesuit principles of pacifism and human rights.

An adjunct professor of English resigned in protest earlier this month. About a third of the school's faculty signed a letter written by two professors in the school's theology department that objected to Dr. Rice's appearance. The letter stated that on a level of moral principle and judgment, Dr. Rice's "approach to international affairs is in fundamental conflict to the values of Catholic and Jesuit traditions and is inconsistent with the humanistic values that inspire the university's work."

The school's African American, Hispanic, Asian and Native American groups also sent a letter to the administration asking that it "stop touting Secretary Rice's race and gender as justification for her invitation."

Dr. Rice addressed the controversy in an interview today with a Boston radio station, WBZ-AM.

"I think it's fine for people to protest as long as they do so in a way that doesn't try to have a monopoly on the conversation," Dr. Rice said in the interview.

During the graduation ceremony, John Cawthorme, the associate dean of students at the school of education, wore a white armband to protest Dr. Rice.

"She stands for everything we don't stand for here," he said. "To honor her says we agree with everything she does, and I don't want to be a part of that." (read more)