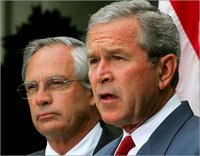 Friend of W, Porter Goss, has resigned as head of the CIA. Let's face it, Goss was chosen for the job by Bush, Cheney, et al to purge the CIA of agents and analysts that are deemed not loyal to the Bush Administration. Goss disrespected the agency, and filled the higher ranks of the CIA with his friends from Capitol Hill.

There is a possible reason for the abrupt departure -- the defense contracts for hookers scandal that has touched the #3 person at the CIA ("Dusty" Foggo). Goss may or may not have screwed any hookers, but he is definitely caught up in the same scandal that has put Duke Cunningham in prison, and has tainted numerous GOP elected officials. This is huge deal. The right will try and spin this to be about the anger of rank-and-file members of the CIA over Goss' changes to the agency. That is a small part of it, but in the midst of a "global war on terror" why would the head of the CIA resign with virtually no notice and before a replacement coule be chosen? There is definitely a scandal involved.