Former KISS guitarist Ace Frehley will be playing in a celebrity poker tournament (as if they didn't already have enough of those) June 8 in Las Vegas. Frehley will be playing along with Pantera drummer Vinnie Paul and Godsmack singer Sully Erna. The contest is sponsored in part by VH1 Classic, who will be having a contest tie-in with the tournament. The winner of the contest is able to determine which charity receives the proceeds from the tournament, and will be allowed to program VH1 Classic for an entire day.

Minneapolis rock legends Soul Asylum have delayed the release of their newest CD until July 11. The new CD, The Silver Lining, will feature the last ever recordings with original bassist Karl Mueller. Mueller died in June of 2005 due to complications from cancer.

Keeping with the trend of every band on the planet having a MySpace page, Soul Asylum has done one as well. They have posted one new song on their page. 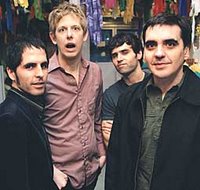 According to Pitchforkmedia, premier indie rockers Spoon are set to begin working on their next record in their hometown of Austin, TX. This will be the follow-up to last year's incredible Gimme Fiction.

Spoon frontman Britt Daniels is also working on a solo album at the same time. The band's label, Merge Records, is also planning on releasing expanded editions of Spoon's first two CDs, Telephono and The Soft Effects, which were originally released by Matador Records in the mid 90s.


If you live in the Omaha area, there are a number of worthwhile shows to see this week. On Thursday (4/13), Portland singer/songwriter John Vanderslice is playing at Sokol Underground. Vanderslice is okay, but opener Ghosty is worth checking out. Tickets are only $8. On Friday (4/14) at Sokol is The Elected. This band is the side project for Rilo Kiley member Blake Sennett. Blake and Jenny Lewis write the songs for Rilo Kiley, and both are spreading their solo wings of late. Opening the show is Neva Dinova frontman Jake Bellows doing a solo set. Tickets are $10. Saturday night at Sokol Underground is Montreal band The Stills. The Stills' newest CD Without Feathers,

It's a pretty solid weekend for indie rock in Omaha...